Jess and I got a house in 2018. I found myself doing a lot of home-improvement weekend projects, and also getting into hobby woodworking.

Trips to the lumber yard were not easy in our Ford Focus. I wanted a truck.

If I had been smarter, I probably would have just gotten a small, easy-to-attach trailer for our existing vehicle — it's not like I wanted to haul a thousand pounds of anything.

But I wasn't smarter, so a truck it was. But I didn't want a giant truck. I was most interested in a late 90s, first generation Toyota Tacoma.

It's probably the smallest "modern" pickup truck — about 80% the size of 2022 base-model pickups. 80% doesn't seem like a massive amount, but it's substantively smaller.

Here are the top-down dimensions compared to a new GMC Sierra.

It's nearly a foot and a half smaller and gets 30% better fuel economy despite being 25 years older.

Despite these massive differences, the Sierra can't tow that much more than the older, smaller Tacoma, and the truck bed capacity is essentially the same.

The only real advantages of the Sierra are related to its size — it has a larger interior and is safer. I don't need a lot of cab space for my quick runs to the lumberyard, and I have some ethical issues with the safety strategy of "so big I destroy anyone I collide with".

Unfortunately, I wasn't the only one interested in these older, smaller trucks. In 2018, they were still selling for $14,000! At over 20 years old! I'm pretty frugal and decided to poke around a bit more.

I learned that the lack of smaller trucks on the market in the US can be partially attributed to the chicken tax. It's a 25% tax on light trucks implemented as a retaliatory tariff against European tariffs on chicken imports.

This tax has shielded American auto manufacturers from foreign competition in the light truck market for a half century, and there are a ton of awesome, smaller trucks that are available in the rest of the world that we don't import.

It's one of those laws that, when explained to someone, they universally agree it should go — regardless of political orientation. When I read discussions of the pros and cons of sunset provisions, the chicken tax springs to mind. I'll have to write more about this in the future.

Despite my political frustrations, I kept typing various permutations of "small trucks" into a search engine and eventually stumbled across kei trucks.

"Kei" (keijidōsha — "light vehicle") is a class of vehicle in Japan. The class is defined by maximum dimensions and engine displacement.

Japanese tax codes incentivize export of used vehicles, so it's possible to find these very cheap at auction in Japan. US regulations permit the import of these trucks if they are 25 years old (and thus exempt from a lot of rules). It's a perfect match.

Transporting and titling them in the US is actually more expensive than the truck itself. All in, you could get one from an importer for around $4000 (the current prices are much higher due to the global supply chain issues in 2022).

There happened to be an importer, SODO Moto, just a few miles away from me. I went and did a test drive of a 1990 Subaru Sambar, loved the truck, and took the plunge.

Here's 5-foot-10 me, my truck, and a GMC Sierra down the block from our house. Whenever I walk by this truck, I am flabbergasted by the size. 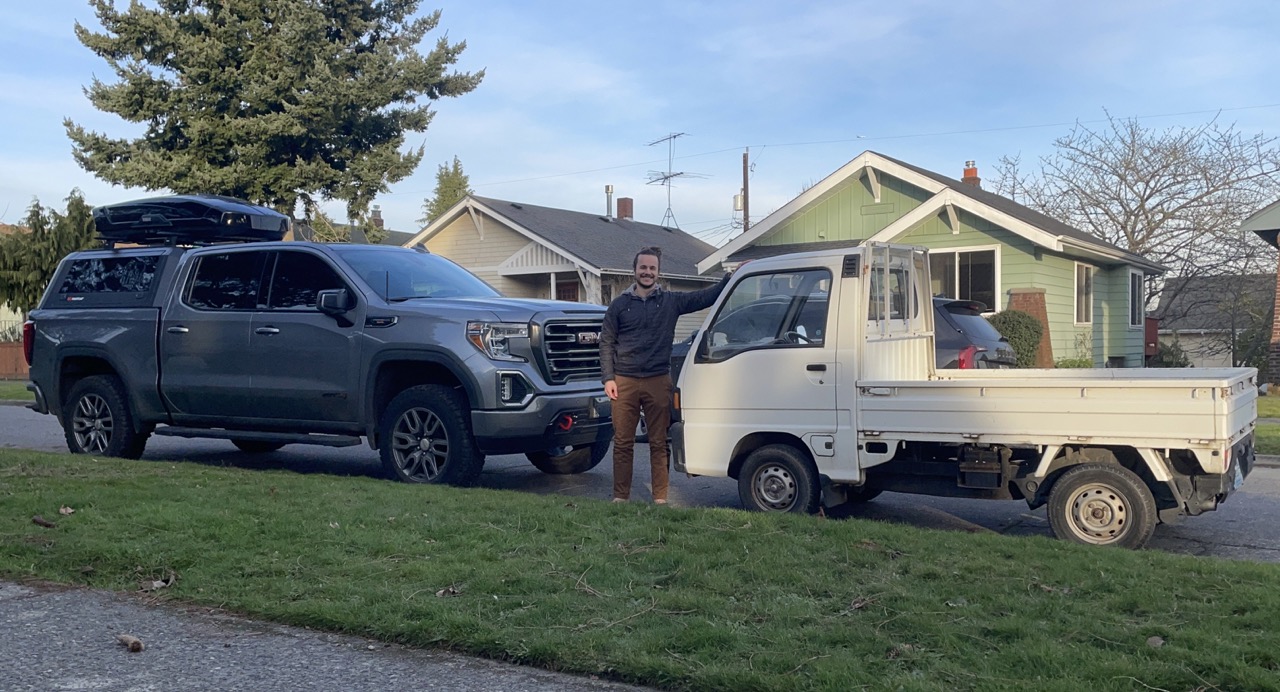 It's really no larger than most other modern trucks, but something about it makes it feels larger. I think it might be the height of the top of the hood. It's up to my shoulder at nearly 5 feet.

There is a lot of data that the popularity of this form-factor is literally killing people. As truck and SUV sizes increase, so do pedestrian, cyclist, and small-vehicle-driver deaths.

The comparison to the first generation Tacoma is much more reasonable. The actual truck bed sizes are basically the same, and the cab sizes are pretty close.

If you discount the wheel-well space on the Tacoma, the Sambar actually has a wider continuous bed. You do pay for it by giving up the bigger wheels, of course, but I'm not planning on taking up rock-crawling any time soon. 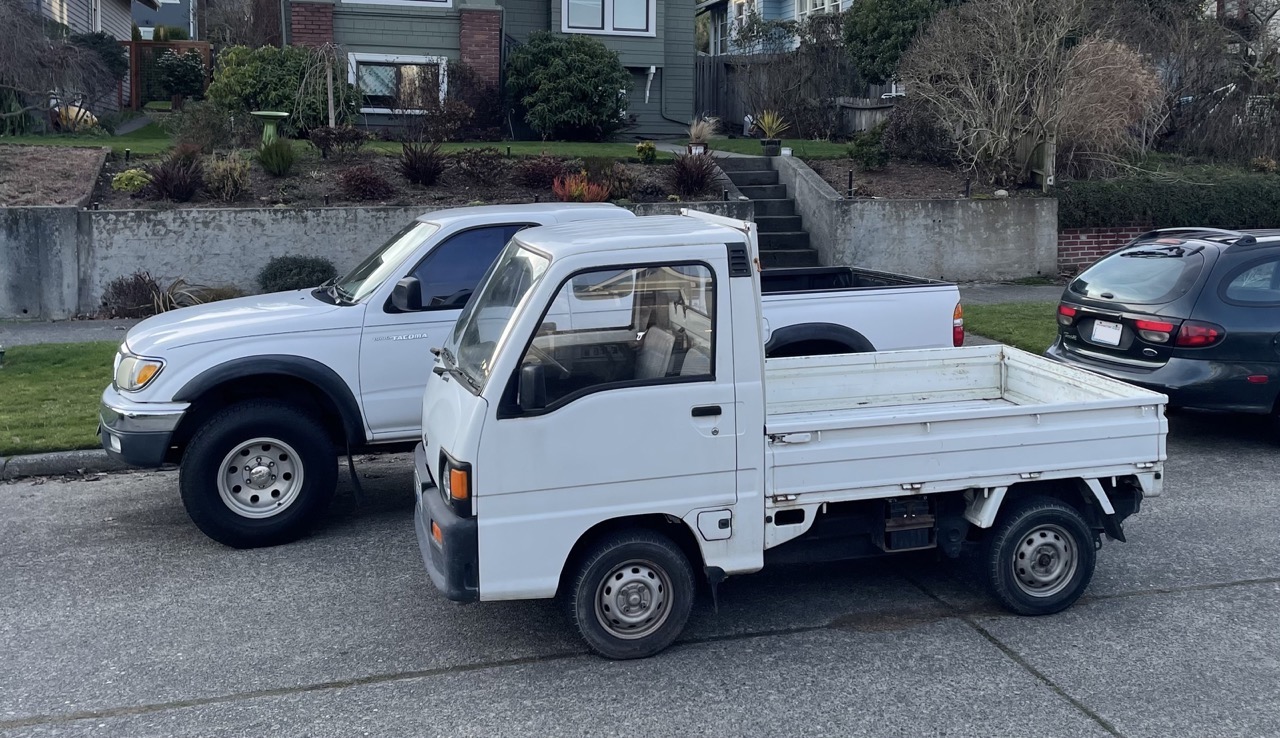 The main difference in dimensions is, obviously, the front. The Tacoma has a much larger, more powerful engine that can't easily fit underneath the chassis like my Sambar.

The Sambar is a great utility vehicle. I mean that in the general definition of the word utility — the state of being useful. In addition to doing normal truck things, a lot of utility is derived simply from its size.

When we go to a concert in dense neighborhoods like Capitol Hill, we take my truck instead of her SUV because it's so much easier to find parking. I can parallel park it into spaces that other cars wouldn't even try. The lack of a hood makes this so much easier — I can cut in at sharper angles, and have perfect spatial awareness of the corners of the truck.

The truck weighs so little, I can drive it on a grass lawn without damage, but for some tasks, I don't even need to do that. The sidewalks in our neighborhood are a half foot wider than the truck. I can pull up a driveway and onto the sidewalk for yard-work or even snowplowing.

The sides of the truck fold down, turning it into a flatbed. In a pinch, it makes a great temporary workbench for all sorts of carpentry. The small size allows me to back it up into position for nearly any project.

Being small and lightweight, the Sambar gets over 40 mpg. With a 10 gallon tank, that's around 400 miles per trip to the gas station. I tank up the truck 2-3 times per year.

When I got the truck, it was 28 years old. It was dinged and scratched and had torn seat covers. Some Japanese farmer got a lot of use out of it.

That is great, because I don't feel bad about a few more dents. If someone whacks my truck with a car door in a parking lot, I tell them not to worry about it. That freedom from worry is a different type of luxury.

Because I don't care about this kind of damage, I can also maintain a very, very cheap insurance policy.

The truck is mechanically dead-simple. There aren't a million computer sensors anywhere that need special equipment to diagnose — it's almost entirely mechanical.

If there is an issue, you can usually just trace cables and belts and wires until you get to the root of the problem. Fixes are easy and straightforward — it's a great vehicle for learning some basic mechanic skills.

One downside is you have to have parts shipped from Japan. The shipping cost isn't too bad, but the wait is a bit annoying. It's usually 3-5 weeks depending on the source.

The truck is pretty idiosyncratic and gets curious looks and grins wherever I go. Kids point and exclaim to their parents about the weird tiny truck. I really enjoy bringing that kind of fun into the world.

Kei trucks are the perfect city truck. You can do all your weekend warrior projects just as well as any other truck.

You won't be towing any speedboats or doing off-roading, but most trucks aren't used for those things. And for your cross-country road trips, just rent a luxury car. The savings from driving a kei truck in-city instead of an F-150 will more than pay for it.

If more people drove smaller, more efficient vehicles, we could put a serious dent in traffic, emissions, and safety.

If you're interested in other ways of getting around, I also wrote a piece about alternative forms of micromobility.